David Simpkin’s 15 window 1961 Deluxe VW bus was fitted with a JMR 2110cc engine in 2007. The original remit was to deliver an engine that emphasised torque and driveability over outright power, return reasonable fuel economy and be capable of running a sub 18 second ¼ mile at the dragstrip – making it eligible for sought after membership of the exclusive VW split screen bus club: Buses With Attitude (BWA).
Nearly forgot… it had to be reliable too. 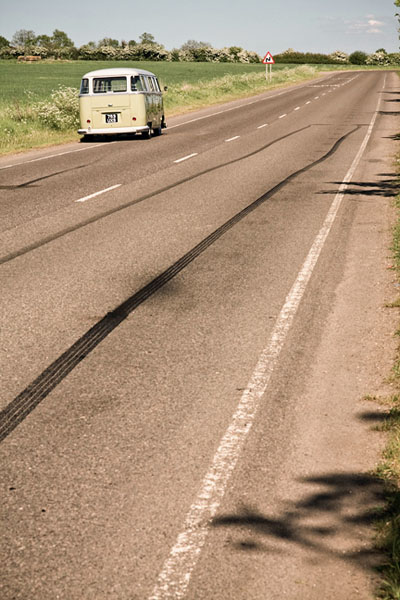 After the smoke clears… a big number 11 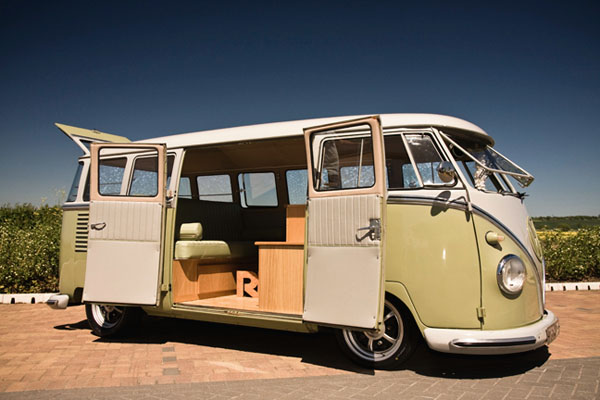 I’ll cover my reasons for the various engine component choices in much greater detail in my upcoming Tech Talk posts but for now here’s a brief overview: 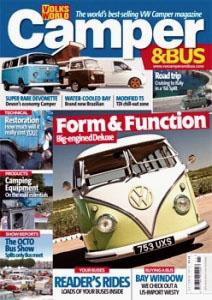 Shortly after David installed the engine, he headed off on holiday to Devon and Cornwall. He took the trouble to accurately measure the amount of fuel consumed on the trip, recording an average of 32mpg – which he openly admits included several bouts of ‘enthusiastic’ driving 😉

I originally supplied the engine with an auxiliary oil cooler, complete with thermostatically controlled fan. The electric fan failed shortly after the bus went on the road. David monitors oil temperature (and oil pressure), as per my recommendation and reports the electric fan wasn’t necessary anyway. As a result of his feedback, I no longer supply or recommend fan assisted auxiliary coolers. 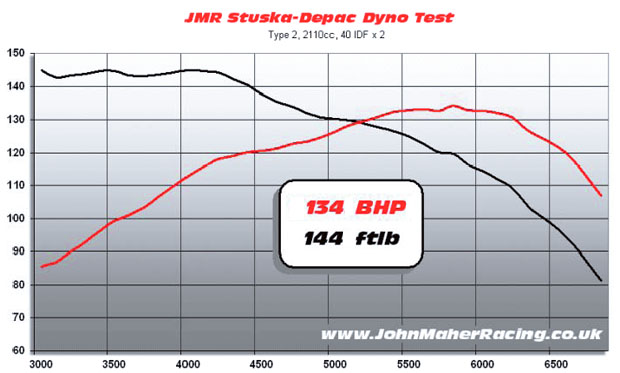 With some of the engine’s requirements ticked off , next on the list was gaining entry into BWA. I’d built bus motors before that had run BWA qualifying times but I couldn’t say with 100% certainty this combination would do the necessary. There are so many variables… it’s much easier for a stripped out panel van than it is for one fully equipped with a camping interior made of solid oak! The dyno figures told me the engine would be great to drive in everyday traffic conditions but if drag racing is your priority, high rpm horsepower is where it’s at.

From the dyno results shown above, you can see the engine’s torque is strongest prior to 4500rpm (the range in which the bus will spend most of its time when driven on the road). A drag race engine might not necessarily make a whole lot more peak torque but by pushing that torque higher up the rpm range (larger valves and ports, longer duration cam, bigger carbs etc), you make more power:
BHP = (Torque x RPM)/5252
That translates into  faster times on the drag strip.

No need to worry…. on his very first run with the new engine he clicked off a 17.4 second pass and qualified for membership of BWA. He expects to go a little quicker when he takes off both roof racks 😉

And to finish, a video clip of the engine being tested on the dyno. I gradually build rpm while increasing load. I pull the engine below 2500rpm at wide open throttle (check the carb linkage), then gradually back off the load, allowing the engine to accelerate all the way towards 7000rpm.

Performance, reliability, fuel economy and a dose of fun – all in one package.

Thanks to David Simpkin for providing the pics