Dynamically balancing the crankshaft assembly is an important part of any engine build. This article attempts to explain why. I’ll kick off with a little theory and then demonstrate by example, showing each step of the balancing process as applied to the crankshaft, flywheel, clutch and crankshaft pulley being used in Project 2110.

What is ‘dynamic balancing’? 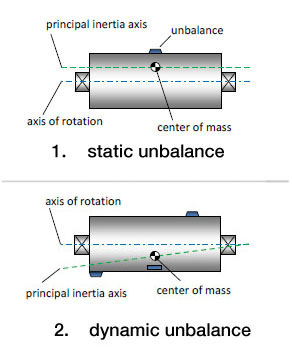 The difference between static and dynamic unbalance

The diagram on the left [figure 1] shows the effect an unbalance located some distance from the crankshaft’s centreline (or axis of rotation) has on the centre of mass. This unbalance results in the crank trying to rotate about a new centreline (the ‘principal inertia axis’). Energy is wasted  as the crank tries to run off-centre, creating vibration, stress and consuming power in the process.

The aim when dynamically balancing a crankshaft is to have the ‘principle inertia axis’ coincide exactly with the crankshaft’s centreline.

I’m sharing data recorded during the balancing of Project 2110’s crank, flywheel, clutch and crank pulley to further explain the tolerances and techniques used to dynamically balance the entire rotating assembly to a very high standard. The remainder of this post deals with the balancing of the crankshaft alone – I’ll round off this topic in my next post, when I deal with the flywheel, clutch pressure plate and crankshaft pulley.

The crankshaft runs on special vee blocks, located at no.1 and no.3 main bearing journals. Sensors in each of the vee block uprights detect the amount of unbalance, while a rotary encoder identifies the location of unbalance to within 1 degree of crankshaft rotation. Here’s a screenshot of the very first spin of Project 2110’s crank… 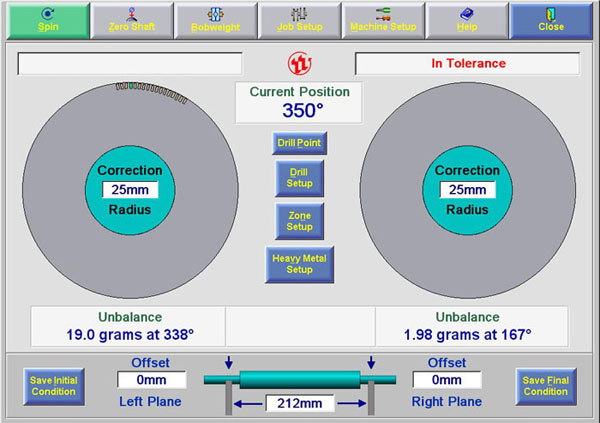 First spin on the balancer for Project 2110′s 82mm crank

… and here’s the crank resting on the balancer’s two uprights. Before I spin each crank, I check for runout on the centre main with a dial indicator – there’s no point trying to balance a bent crank! 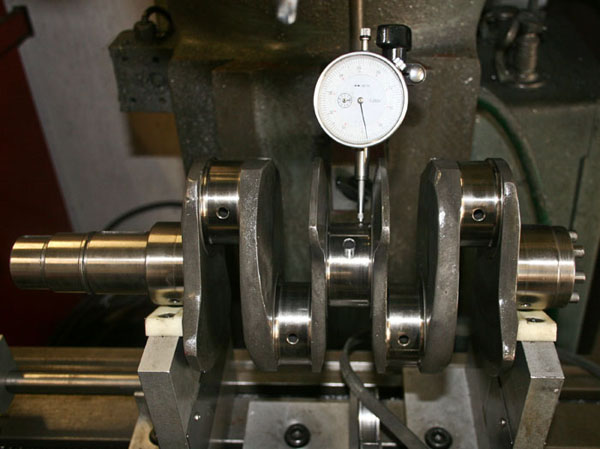 Balancing to a tolerance

The greater the unbalance and the further it is from the center of the crankshaft, the more the engine shakes and hammers the main bearings and crank. Over time, this can lead to metal fatigue and cracks that can cause bearings to fail or the crank to break.

The rpm range of the engine plays a major factor… 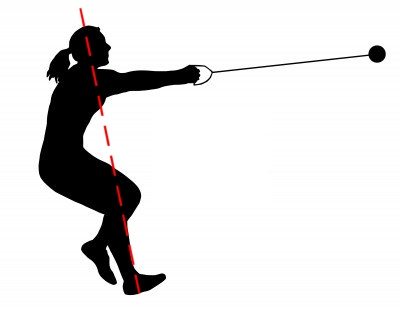 Centripetal force at work… the unbalanced weight forces the athlete to adopt an off centre axis of rotation. Imagine the athlete being constrained by a ‘virtual’ set of main bearings, forcing her to maintain a perfectly vertical axis of rotation and therefore unable to counter the force created by the spinning unbalanced weight. It’s gonna be difficult to stay upright!

A rotating object generates “centripetal force”. This is a force (or load) generated perpendicular to the direction of rotation. Tie a rope to a brick, twirl it around and you’ll feel the pull of centripetal force generated by the “unbalanced” weight of the brick. The faster you spin, the harder it pulls. The magnitude of the force increases exponentially with speed. i.e. by doubling  engine  speed you multiply the load four times. Triple the engine speed and force multiplies by a factor nine.

For a variety of reasons it’s impossible to achieve absolute balance perfection, so we work within a range of tolerances. It’s common practice to quote the amount of unbalance in grams or ounces and then state the distance that unbalance is from the centre of the crankshaft (correction radius). You’ll typically see this expressed as ‘ounce-inches’ or ‘gram-inches’. Because I have my balancing software switched to metric, I’ve set the correction radius to 25mm (just shy of 1 inch) and aim for an unbalance weight of less than 4 grams. This is a finer tolerance than most balancing shops use for performance street engines – the most popular tolerance being ‘0.6 ounce-inches’. Equivalent to 17 gram-inches compared to Project 2110‘s target of less than 4 gram-inches (4 gram-25mm).

My chosen tolerance of ‘4 gram-25mm’ is exactly the same as having an unbalance of 2 grams at a radius of 50mm or 1 gram at a radius of 100mm. Remember: the further away from the centre of the crank any unbalance occurs, the greater its detrimental effect. To help you visualise an unbalance of 4grams at a correction radius of 25mm (same as 1 gram @ 100mm), picture a £10 note (0.923 grams), sitting close to the outer edge of the flywheel. That’s a very close approximation of the amount of unbalance remaining in a crank assembly that’s been balanced to a ‘4 gram-25mm’ tolerance.

I’ll explain the process further as I take you through the various steps of balancing Project 2110‘s crank, flywheel, clutch and crank pulley. Looking at the screenshot of that first spin again:

First spin on the balancer for Project 2110′s 82mm crank

This is the crank by itself i.e. no timing gears or woodruff keys. This is exactly how a lot of balancing shops will deal with your crank. The figures on the right are fine: 1.98 grams @ 25mm radius is well inside our target tolerance of 4 grams but the left side (pulley end of crank) is seriously out of tolerance at 19.0 grams. At this point the person working on your crank will set to work and start removing weight to reduce the amount of unbalance. However, there’s a problem… because the crank gears, gear spacer, circlip and woodruff keys aren’t in place, balancing the crank in this state doesn’t truly represent real world dynamic operating conditions i.e. when the engine is fully assembled and running. 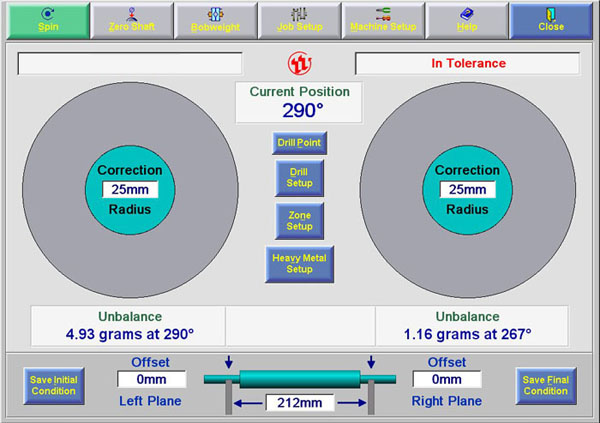 Fitting the crank gear assembly makes a big difference to the amount of unbalance.

… it’s gone from 19.0 grams down to 4.93! The moral of the story: your crank gears absolutely must be in place when having your crankshaft assembly balanced! 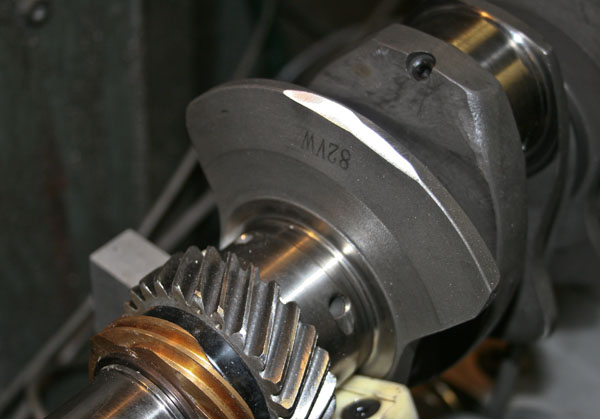 Weight removed from the counterweight to reduce crankshaft unbalance

After a few more spins, removing a little more weight each time, here’s the end result:

Good enough for a NASCAR engine running at 9,800rpm for hours at a time!

That’s the crankshaft balanced. In the next instalment, Part 5: Dynamic Balancing (continued), I work on the flywheel, clutch pressure plate and finally the crankshaft pulley. There’s a little more theory – demonstrating the dramatic effect engine rpm has on centripetal force.

Building your own engine? Need your crankshaft assembly balanced as per Project 2110?
Click here for more info and pricing.

Sign up to the newsletter for email notification of the the next installment of Project 2110.