In Part 2 I explained my reasons and some of the theory behind the bore and stroke combination I’m using in Project 2110. In this instalment I’m going to cover the machine work required to physically accommodate an 82mm stroke crankshaft and big bore 90.5mm cylinders.

As with the vast majority of my engine builds, I’m using a brand new, AS41 magnesium alloy, dual relief crankcase. The first machine work operation is to bore the case for Mahle 90.5mm cylinders. Although you might expect the crankshaft centreline to lie  exactly in the centre of the crankcase, in reality it tends to sit a little off-centre and more often than not, it doesn’t run absolutely parallel to the case parting line. 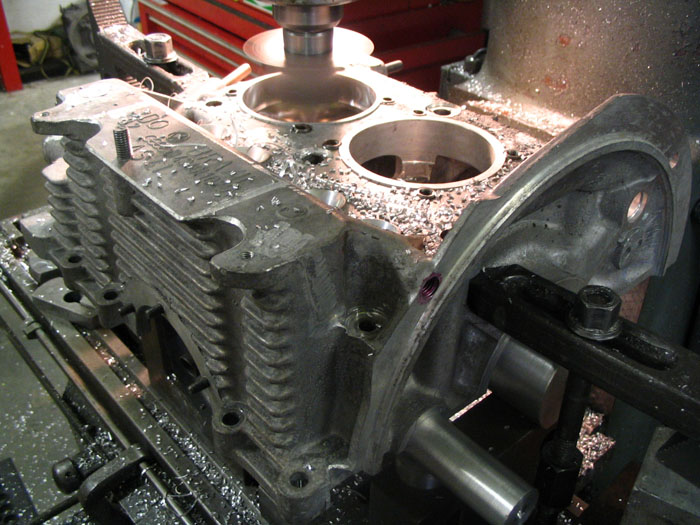 This fixture ensures the cylinder seating faces are machined exactly perpendicular to the crankshaft centreline.

The amount of crank centreline offset varies from case to case. In the pic below I’m carrying out a quick check for misalignment with a depth micrometer and crankshaft dowel pin. 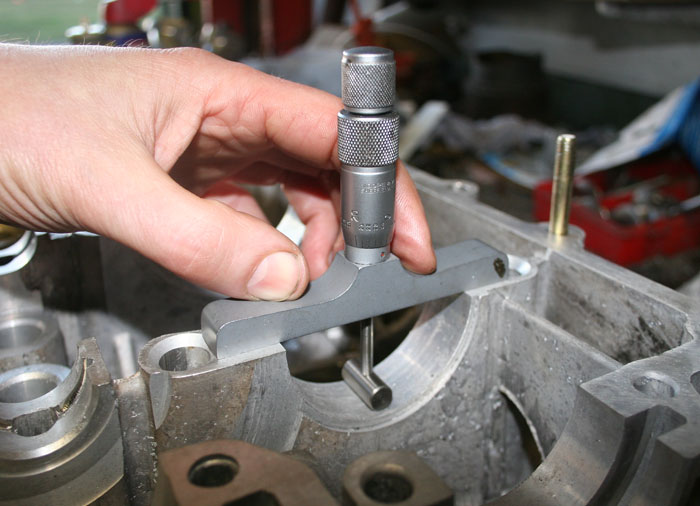 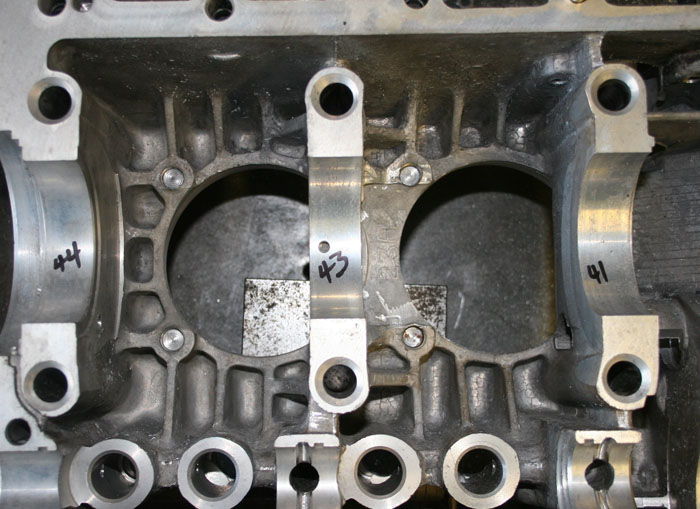 A variation of 0.03mm between bearing saddles no1 and no3

Boring and decking the case as setup in the photo at the top of the page, ensures each cylinder is positioned at exactly 90° to the crank, and sets the cylinder seating faces on both sides of the crankcase at equal distance from the crankshaft centreline. If instead, the case was bored and decked based off the case parting line, the conrods wouldn’t run perfectly straight in the cylinders.

Notice the case has been step bored: boring as deep as necessary to accommodate the cylinder spigot and then stepping down to a smaller diameter. It takes a little more work but it adds some additional strength in the cylinder seating area compared to cylinder apertures that are bored the same diameter all the way through: 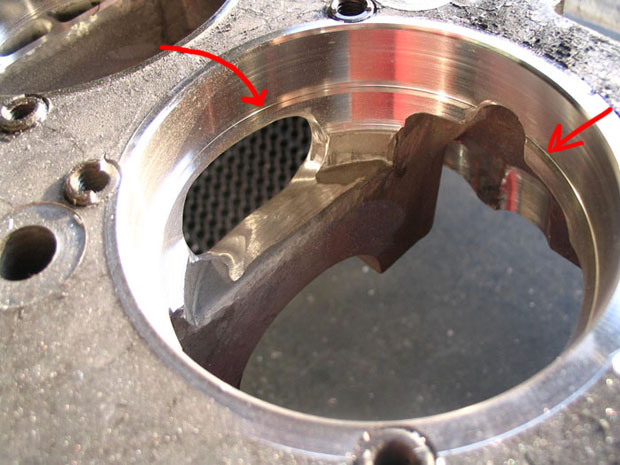 The larger diameter (top) extends deep enough to allow the cylinder to seat fully on the case. The smaller diameter cut is sufficient to clear the piston

The next step is to clearance the case internally to make space for the 82mm crank and conrod combination.

When the crankshaft and connecting rod assembly is trial fitted to the crankcase, there must be 1mm clearance at all points through the crankshaft’s rotation. 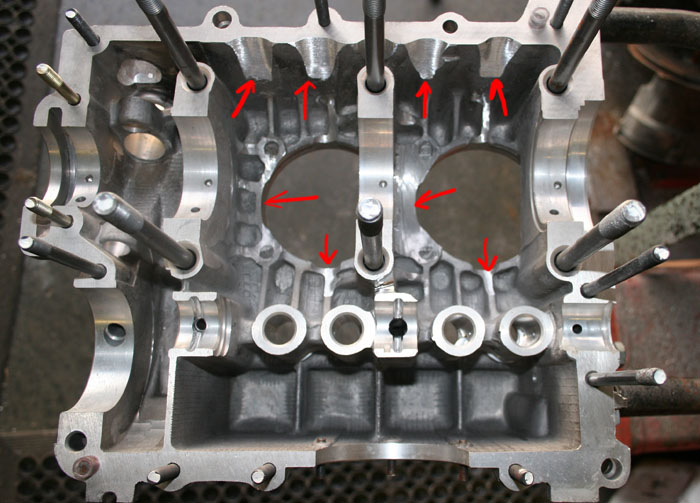 Having completed clearancing and boring the case, further work is carried out to improve the oiling system.

First of all, several of the oil gallery core plugs are removed. This allows thorough cleaning of all the case passageways prior to final assembly and the installation of a fitting for the full flow oil filtration system. 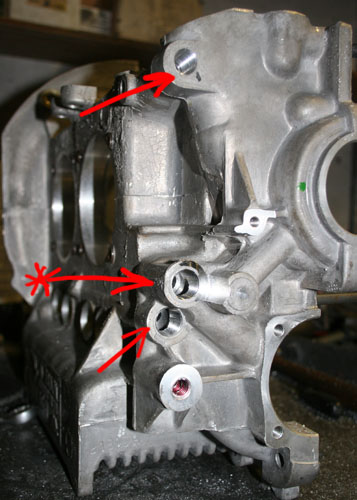 These three oilways have had their aluminium core plugs removed. The top and bottom galleries will be plugged with allen grub screws. The asterisked oilway is the location for an oil return fitting. Notice how the protruding boss has been clearanced for installation of a 90° fitting.

In the picture above, the lower of the three red arrows points to the main oil gallery, which runs in a straight line all the way through to the flywheel side of the case. By removing the core plug on the other end, you can see straight through from one end of the case to the other: 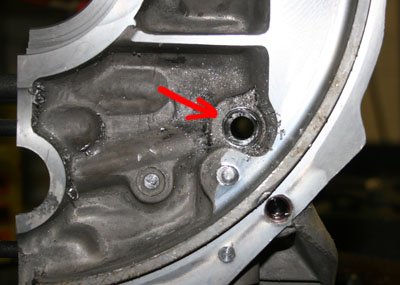 So far all the removed core plugs have been on the left hand case half (cylinders 3 & 4). One small plug on the other half is removed to allow excess to the oil hole that carries lubrication to the lifter bores: 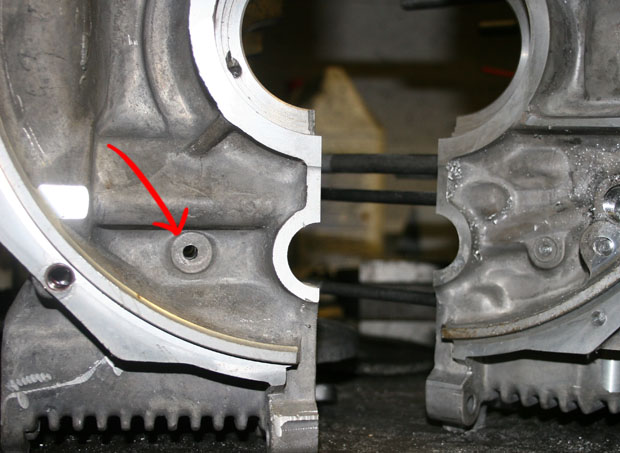 The oiling modification to the lifter bores is commonly referred to as the HVX mod, attributed to Bob Hoover.

The HVX mod improves oil flow to the lifter bores by extending the oil gallery in the right case half all the way to the cam bearing saddle nearest the oil pump housing: 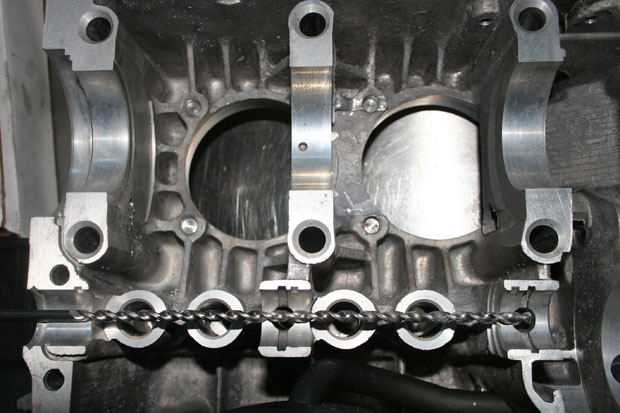 Showing the path of the oilway extension 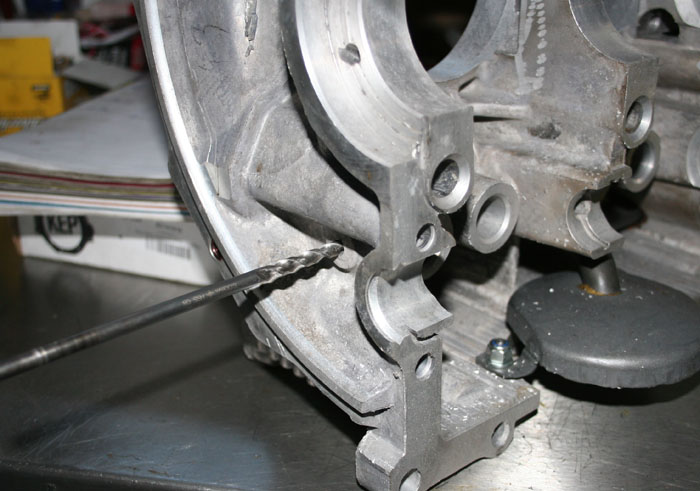 Drilling lifter bore oilway in the right hand case half

Before doing this, it’s important to check the lifter bore oil hole depth along the length of the case. If it runs out by more than a couple of millimetres you risk the extended hole exiting through the side of the case: 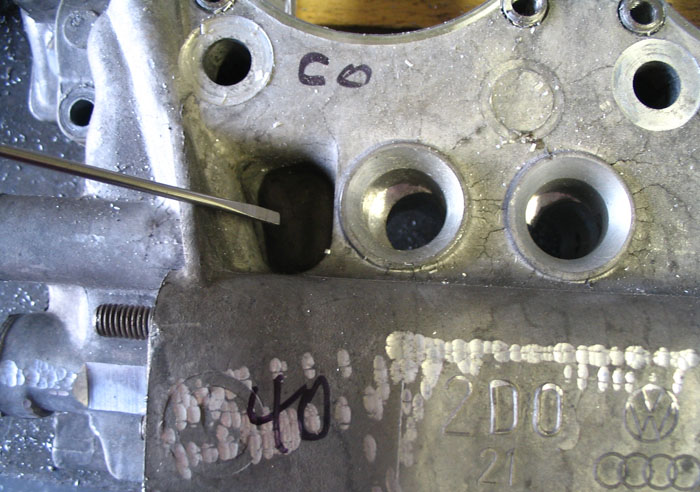 If the lifter bore oiling hole runs out of spec, this is where the extended hole might terminate. Result: one scrap crankcase!

I then increased the size of the oil grooves behind the rear and centre cam bearings to aid transfer of oil from one case half to the other: 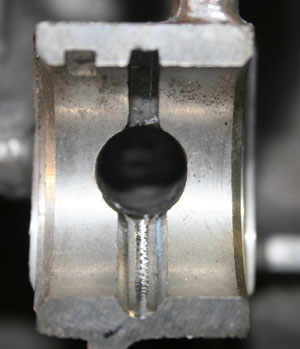 In this picture I’ve opened up the lower half of the oil transfer groove. This increases volume by approx 15%

One final camshaft related job is to check all eight lifters can rotate freely in their bores. I’ve found many new cases have slightly ‘sticky’ lifter bores. If a lifter doesn’t rotate while in use, it’ll wear out extremely quickly: 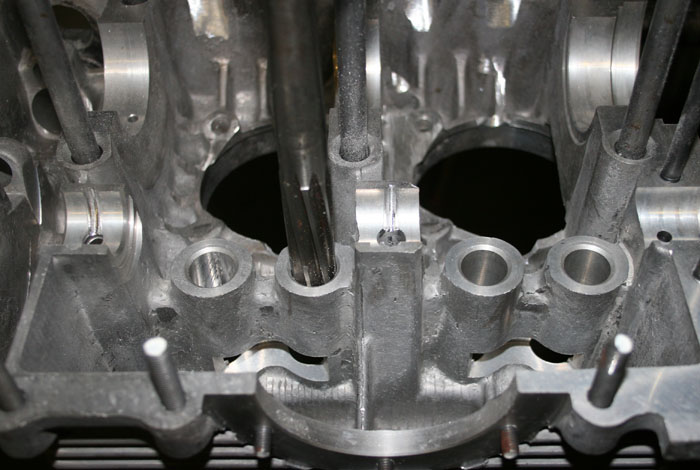 Next up, a minor tweak to the oil drain hole in the flywheel oil seal area. I enlarge the stock drain hole by 0.5mm and add a chamfered entry. This improves oil drain back into the case, reducing the risk of oil leaking past the seal when oil pressure is high: 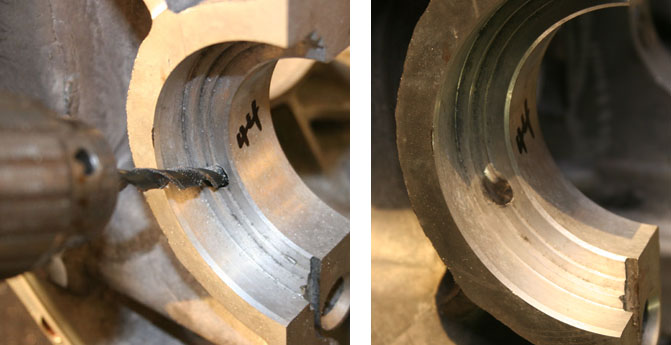 And finally, a couple of mods that help reduce internal case windage. When pistons 1 & 3 start their descent from TDC, pistons 2 & 4 are on their way up from bottom dead centre. The air displaced by both pairs of opposing pistons transfers from one end of the case to the other. At high rpm this air movement creates a huge amount of internal turbulence, often seen in the form of oil and vapour exiting the breather(s). Making it easier for this air transfer to take place reduces windage, which in turn reduces the amount of pressure the breather(s) have to deal with.

The stock case has a window just below each pair of cylinders, adjacent to the centre main bearing saddle. While adequate for a stock engine, the increased stroke and bore of a high performance engine creates more internal case pressure. For a given rpm, piston speed increases with longer stroke.

Stock air transfer window on the left. Right: after modification

The picture below shows another couple of mods that also assist air transfer between the front and rear case halves:

Sign up to the newsletter for email notification of the latest instalment.