BBC Alba presenter Fiona Mackenzie visits the JMR workshop. ‘Air an Rathad’ (On the Road) is a low budget ‘Top Gear’ style TV show, broadcast on BBC Alba – a  channel aimed at the Gaelic speaking population of the highlands and islands of Scotland (hence the subtitles). She chats to John Neil Mitchell, owner of  a 1969 JMR powered 2332cc 208bhp VW Beetle. Fiona takes the wheel for a drive around the scenic roads in the vicinity of the JMR workshop. Includes a brief look at the JMR dyno and a trip back in time to John’s former day job as drummer with punk rock band Buzzcocks:

The first drag race ever held in the Outer Hebrides took place in 2008, on the service road running alongside the runway at Stornoway Airport on the Isle of Lewis. It was a real grass roots affair, with the cars being launched on the thrid blast of an air powered klaxon. The timekeeper was stationed at the finish line with a stop watch. Strong crosswinds ensured the stopwatch was started well after the cars left the line. Terminal speeds were recorded by one of the local police with a government issue handheld ‘hair-dryer’.

The event was so succesful, Lewis Car Club, the organisation behind the event, started looking for better quality timing equipment than the stopwatch and police radar used at the first event. They raised funds to purchase a pro drag race christmas tree, staging beams, ¼ mile ET and terminal speed traps, plus a timeslip printer from Portatree. 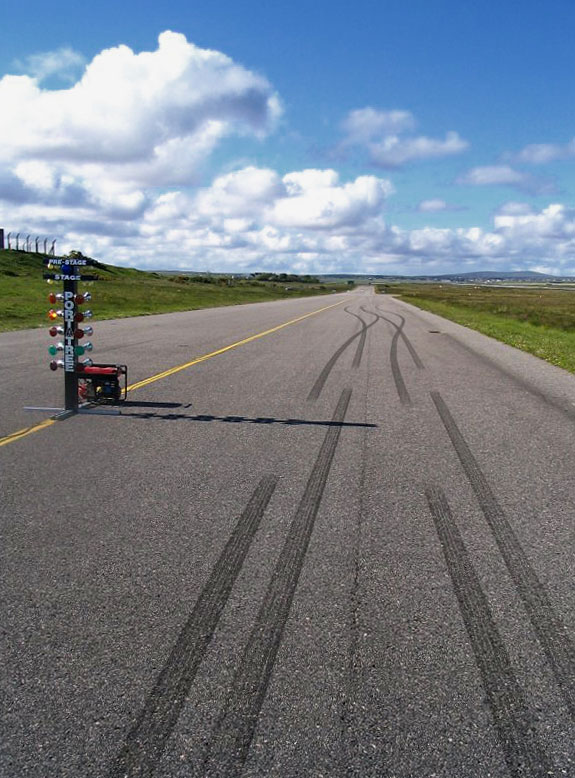 View from the startline at Stornoway airport’s temporary dragstrip

European and UK quad bike champion, John Neil Mitchell has been a customer of mine for a number of years. He owns a 1969 Beetle and had been accumulating a bunch of bargain performance parts via ebay and a couple of the VW internet forums. I took his parts collection, filled in a few missing gaps and assembled a 2332cc engine that made 208bhp on the dyno. The car went down a storm when he atteneded his first drag race at Stornoway airport in 2009. It reminded me of the first time I went racing – in front of a crowd totally unaware of the potential performance of a performance tuned aircooled VW. The fact old VWs could be quick hadn’t yet reached Stornoway!

In 2011 I was persuaded to take over driving duties – John Neil was otherwise occupied at a round of the UK quad bike championship. Despite my best efforts, I was six tenths off his quickest time on the temporary strip (13.8 to his best of 13.2). Even so, I’ll confess I had a blast. My first time on the ¼ mile since 1994. 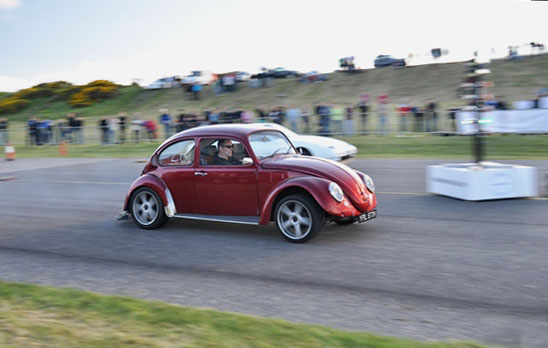 JM behind the wheel at the Stornoway drags in 2011 (photo: Andy White).

When I first moved here (2002), I never thought for a minute I’d see drag racing take place on my doorstep! Neither was I aware of how strong the car scene in general was on the islands.