An Lanntair is the largest art gallery in the Outer Hebrides.  In April 2010 they asked if I’d be interested in creating an exhibition centred around my work with Volkswagen engines. Never having thought about presenting a bunch of VW parts in an art gallery before, I had to do a bit of head scratching as to how or what to come up with. Inspiration came in the form of a drawing featured in John Muir’s classic book: “How to Keep Your Volkswagen Alive“. 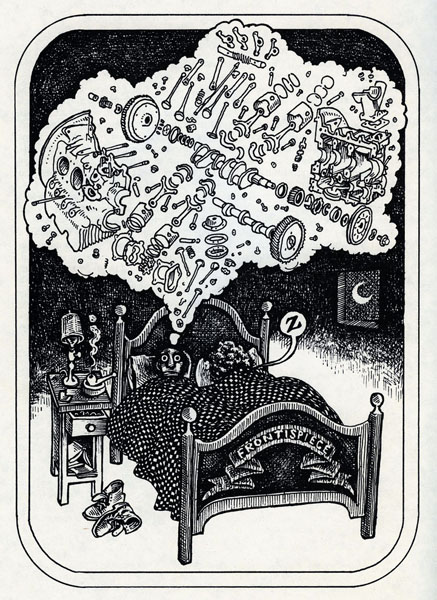 It’s an image that has stayed with me ever since I first bought a copy of Muir’s book in 1979 and is a scene I imagine many VW enthusiasts can relate to!  My interpretation of that drawing consisted of mounting the entire contents of a 2276cc engine on to the main wall of the gallery – a real life version of the exploded view depicted in Muir’s book. I took all the parts up to An Lanntair, set them out on the floor and left the gallery staff to transfer my layout from horizontal to vertical. As familiar as I am with all the parts involved, it still came as a surprise how much space the engine occupied when displayed in this way.

The remainder of the space was taken up with John Mitchell’s 1969 Beetle, which features a JMR 2332cc IDA motor and close ratio transmission. We also had one of the last aircooled 911s on display, courtesy of local motorsport legend Kiwi. I also brought along a mocked up 2276cc engine and a collection of A2 prints showing some of the contents of my workshop. To add a bit of colour, Lewis Car Club set up their full size drag race christmas tree in the corner.

Entitled: ‘Muscle: Anatomy of a Racing Engine’, the exhibition ran from 19th Feb to 19th March 2011. An Lanntair reported a huge increase in the numbers of ‘lads and dads’ entering the building 😉
I thought the whole thing was in danger of going down like a lead balloon but  feedback has been overwhelmingly positive and has turned out to be one of the gallery’s most popular shows.

More pictures from the exhibition here:

View a further selection of images from An Lanntair’s “Muscle: Anatomy of a Racing Engine” exhibition